They Mystery of the Brachial Plexus

They Mystery of the Brachial Plexus
Posted on: 21 July, 2021 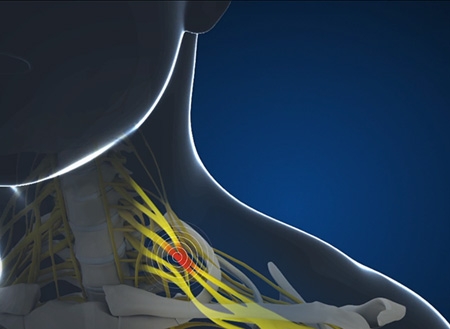 Bones can fracture, muscles can strain, ligaments can sprain, and joints can become arthritic, but what about nerves? Nerves are subject to injury as well. One region of the body that is subject to nerve injury is the brachial plexus. This network of nerve branches innervates, or controls, the upper extremity. How do nerves become injured? Damage to the brachial plexus can occur in varying circumstances but all with the same general mechanism of injury-trauma to the area between the neck and shoulder that stretches or compresses the nerves that run through that region; thus, hindering their functionality. It is important to note that, in general, nerves are slow structures to heal.

Nerve injuries are given different names to describe the severity of injury to the affected extremity. Neuropraxia occurs when the nerves are stretched but not otherwise damaged. Symptoms often resolve over the course of a few months. A neuroma could form if the nerves were stretched enough to cause damage that results in scar tissue pushing on the nerve.

Sometimes residual symptoms remain despite intervention to remove the neuroma. Ruptures or avulsions describe the nerve tearing or even being pulled off the spinal cord, respectively.

This is one of the earliest injuries one can endure as trauma to these nerve branches can happen during a challenging labor and delivery. Complications that require the baby being removed quickly from the birth canal can cause damage if a baby’s shoulders get stuck during the process. The nerves can get stretched as the neck is forced to the side away from the shoulder. Oftentimes early physical therapy performed with assistance from caregivers helps to restore function. In more severe cases, damage to the nerves can affect the development of that extremity. Surgical intervention early to repair the nerves with a graft can be helpful in minimizing symptoms. Other surgical interventions later in life can provide some improved function of the affected extremity.

Another common injury to the brachial plexus occurs during football. Often referred to as a ‘stinger’ due to the resulting symptoms, this injury is caused by a player’s neck being forced to the side and away from the shoulder and stretching the brachial plexus. Symptoms include feelings of shocks, burning, or pins and needles radiating down the arm into the fingertips.

Weakness is also common as muscles require nerve innervation to fire appropriately. If the nerves were just stretched, full recovery is likely. If the force was great enough to rupture or avulse, residual symptoms will typically result. Newborns and athletes are not the only ones subject to brachial plexus injuries. They are known to happen during motor vehicle accidents as well, specifically motorcycle accidents where the rider is thrown from the bike.

A condition called Thoracic Outlet Syndrome falls within this realm of pathology and occurs when the nerve is specifically compressed between the clavicle and first rib (aka the thoracic outlet). Thoracic Outlet syndrome can be caused by trauma, repetitive activity, or congenital abnormalities such as an extra rib. Similarly, Parsonage-Turner Syndrome is a condition where the network of nerves in the brachial plexus becomes inflamed and results in sharp pain and subsequent weakness in the affected extremity. Clinicians are not certain as to the etiology but think it could be related to infection, recent vaccination, cancer, or trauma. Both of these conditions cause the same symptoms of sharp, radiating pain, numbness, and tingling.

Regardless of how the injury happened or the condition started, long-lasting symptoms may result in more formal work-up including a nerve conduction test, or EMG, to determine the extent of damage to the nerve branches. For acute injuries outside birth, your physician may order x-rays or an MRI to assess any other structural changes that may have occurred at the time of injury. In general, minimal treatment for brachial plexus injuries includes rest and eventual physical therapy to help strengthen the muscles as the nerves start to fire once again.

This blog is written by one of our very own-Morgan. She is a certified athletic trainer working in our clinic with our providers each and every day. She obtained a bachelor's degree in athletic training from Carroll University in Waukesha and a master's degree in Kinesiology from Michigan State University.